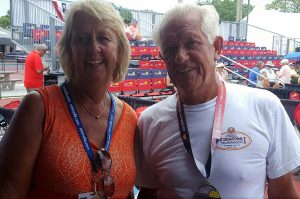 Nancy Lewis from Dallas, Texas, USA and Ian Medhurst from Oxfordshire, UK meet up with each other while participating at the USAPA National Pickleball Tournament in Naples, USA. They first crossed Pickleball Bats at 20 paces, while taking part in the Mixed Doubles 60+ at the Spanish Pickleball Tournament, Madrid in 2015. At that time, Nancy was partnered by Ian Wilson from Oxfordshire UK, (UKPA President) and Ian Medhurst was partnered by his wife Susan. Nancy and Ian Wilson won the first match between the couples, during the round robin stage in Spain. They meet again in the knockout stage, with the winners going for the Gold and Silver Medals. Ian and Susan Medhurst won this match. This was the only match that Nancy and Ian lost during the tournament. Final result for the group was Ian and Susan won the Silver Medal and Nancy and Ian won the Bronze.  We are not sure if they want to go on and play a decider at some Point !!