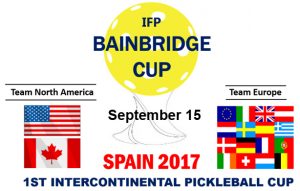 The inaugural “IFP Bainbridge Cup” is a Pickleball Team Competition featuring “Team North America”, “Team Europe”. They are also hoping for a Team to represent the “Rest of the World” This tournament is being held on 15th September 2017. All games are doubles for  Men’s, Women’s, Mixed Doubles. The 3rd International Pickleball Tournament – Spain 2017 will be held on 16th and 17th September 2017. On 13th and 14th September there are Pickleball Clinic’s for those who arrive early.

If you register for the Bainbridge Cup, you get 4 games with 1 point for a win. These are added, if you are European, to “Team Europe’s” score. The team with the highest score at the end of the tournament wins the trophy.

Are you a Pickleball player who would like to combine a holiday with Pickleball? Would you like to represent “Team Europe” at Pickleball? Age or skill level is not a barrier to having fun. If you would like to enter or find out more, view and click on the links below.