Some of our pickleball players may not be aware that after the 1st Bainbridge Cup tournament was concluded in Madrid Spain in 2017, the IFP decided to present a Sportsmanship award to someone who went out of there way to help others at the event. You may have heard our very own Ian Medhurst was nominated to be it’s first recipient.

It was proposed to present the award to Ian at the Bainbridge Cup tournament July 2018 in Italy. This was not possible as Ian was taken seriously ill while partisipating in the US Open Pickleball Tournament in Naples, Florida in April.

Ian’s recovery has been very slow, preventing the presentation to take place. We are pleased to report, Ian was presented with the award on Sunday 30th September 2018. Because Ian is not in a position to receive visitors other than close family, an exception was made to allow a very small group of close friends to see him, to make the presentation. 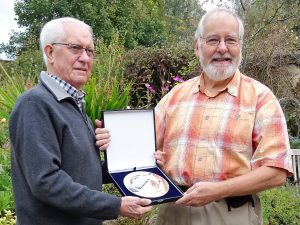 The above photo shows Ian Wilson making the presentation to Ian Medhurst on behalf of the President of the International Federation of Pickleball (IFP) Mike Hess. Also present was Ian Wilson’s wife Maureen and Steve White who had helped organised the awards transport from Italy to the UK, with the help of Roberto Rospo, the recipient of the Bainbridge Sportsmanship award for 2018 in Italy.