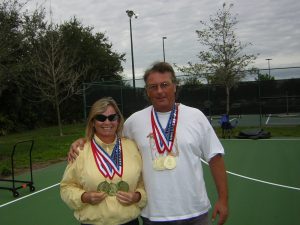 We have known for some time, there are a number of Britain’s who have been playing Pickleball for many years, before its popularity started to grow here in the UK.

People like Mhairi Adam from Scotland, who started up and runs the Glasgow North Pickleball Group, has played Pickleball for over 14 years. Vinny Hindley, people who attended the Madrid Tournament last year will know him, as he won 2 medals there and has played for a similar Period.

What we did not know was – Where any of these Pickleball early-birds successful in their endeavours to win any tournaments.

We believe we have now found Britain’s most medalled Pickleball couple in Arthur Severn (Art to his friends) and his wife Susan, who hail from Yorkshire. They fell in love with Pickleball some 20 years ago. They spend up to 6 months in the USA most years, while there they have entered many Pickleball tournament events. Over the years they have amassed over 60 medals. The picture above shows them displaying their Gold Medal tally from the Florida State Senior Games. Congratulations to Art & Sue for their Pickleball prowess.